'A whole lot of fireworks.' | Thunder Over Louisville through the years

We're taking a look back at the spark that led to the first Thunder Over Louisville and some of the event's memorable moments. 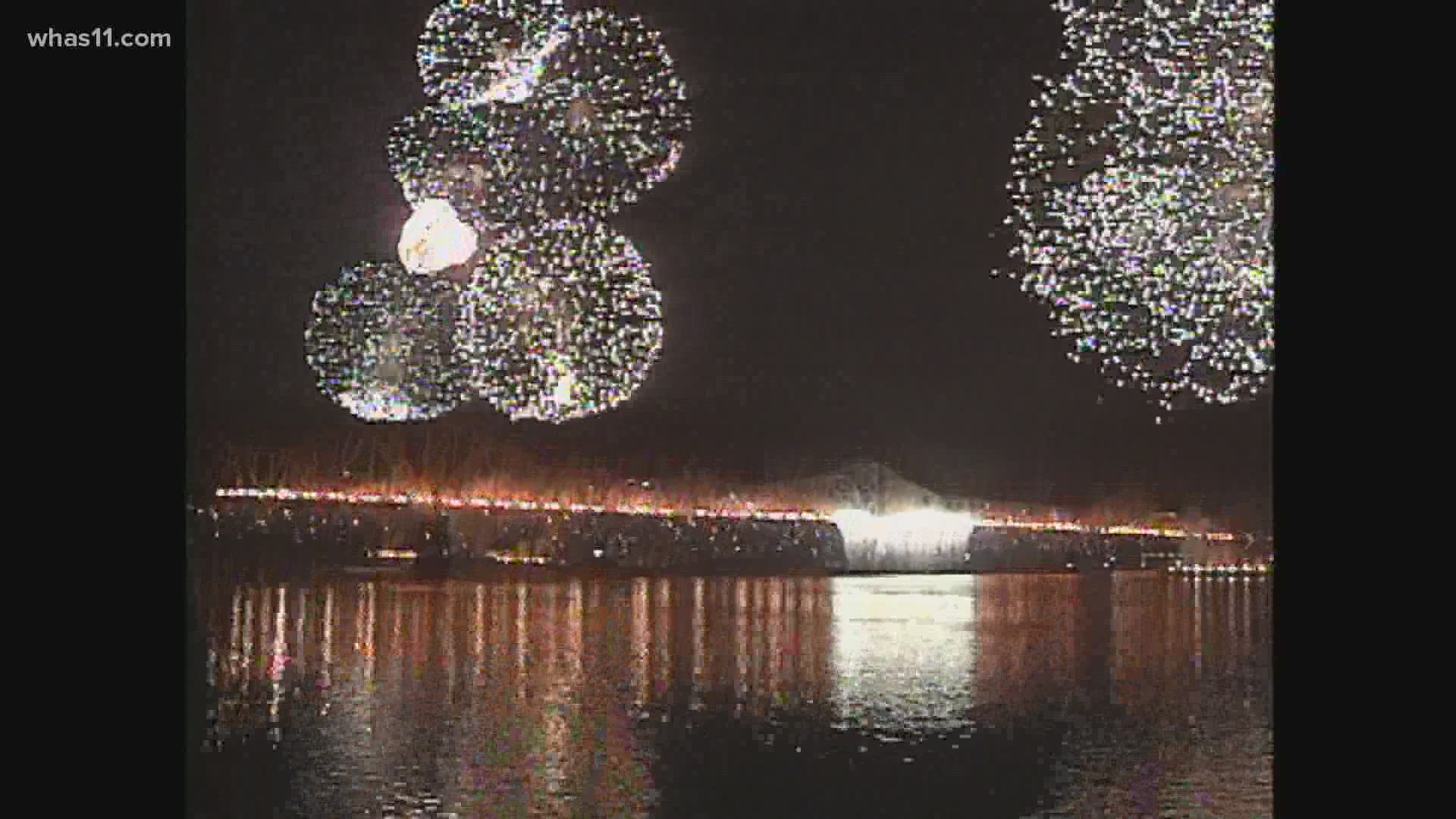 LOUISVILLE, Ky. — You may know it as the kick-off to the Kentucky Derby Festival or one of the largest fireworks shows in North America, but how much do you know about the history of Thunder Over Louisville? We’re looking back at how the iconic event got its start more than 30 years ago and some of its most memorable moments.

The spark that led to Thunder Over Louisville was a daytime fireworks show produced and launched by Wayne Hettinger in 1988. The KDF team decided to close the They're Off! Luncheon with a daytime firework display and huge balloon release at Cardinal Stadium.

Like any good idea, the daytime event became the spark for a bigger opening ceremony to the Kentucky Derby Festival.

“We were basically fashioning it over the opening ceremonies for the Olympics. So, that’s the reason we were looking at fireworks,” Wayne Hettinger, producer of Thunder Over Louisville, said.

The event wasn’t yet known as Thunder Over Louisville. It had a different name – Opening Ceremonies of the Kentucky Derby Festival.

But even back then, they were thinking big.

“If we’re going to do fireworks, we need to do more fireworks than had ever been done in the state of Kentucky before,” Hettinger said.

According to Hettinger, inspiration for the name came from a Tom Cruise movie.

“We stole the name Thunder, if you will, and that seemed to fit,” Hettinger said.

The following year, in 1992, the airshow was incorporated. Hettinger said it was a way to keep everyone entertained before the fireworks display.

In 1994, special themes were introduced, bringing music into the firework show. Through the years, musical themes have ranged from Broadway to Country music.

If you ask Hettinger his favorite musical theme for Thunder, he'll say disco.

"That was the best selection of music to fit programming for fireworks. There is no soundtrack better than that disco sound. It just has that beat to really turn loose fireworks," Hettinger said.

Over the years, event organizers have seen their fair share of stressful moments that now bring a laugh.

In 1997, Hettinger decided to launch fireworks from two downtown bridges—the 2nd Street Bridge and the Falls of Ohio Railroad Bridge. But at 1:30 in the morning before Thunder, a huge storm rolled in and something unexpected happened.

“There was a bolt of lightning that set off the entire series of fireworks sitting on the railroad bridge,” Hettinger said. “We were working in the command center and somebody came in and said, ‘Did you all know the fireworks are going off on the bridge?’ I said, ‘What?’ We thought he was kidding. It was a hell of a show!”

Later the same night, the computers wouldn't sync. It caused a 20-minute delay of the fireworks show as over 700,000 thousand people waited.

“I thought if it’s going to take a few minutes to straighten the problem out and make that show happen that’s what I wanted to do,” Hettinger said

The show must go on.

Hettinger said his favorite part of the show is the false ending before the finale. It has become a crowd favorite as well.

"We want people to see this finale. So, why don't we just shut it down for a minute, let the air clear out before we start the finale? But its become an icon," Hettinger said. "They know it's time to buckle up."

After taking a year off due to the coronavirus pandemic, Thunder Over Louisville is back in 2021. While it won't be held at the waterfront with the usual enormous crowds, it will be an event like no other, according to organizers.

Firework displays will be held in five different pop-up locations across Louisville and the entire event can be seen on WHAS11.

This year's theme is "Illuminating our Community" and Hettinger said, "The lyrics for the song are going to be very fitting to try to wrap up what we've tried to do with the entire show and it's about coming together."

When asked what expect at this year's Thunder Over Louisville finale, Hettinger laughed and said, "A whole lot of fireworks."