Here are 11 things to know about Thunder Over Louisville

America's largest air show and fireworks celebration draws hundreds of thousands every year but due to the pandemic, it will look a little different this year. 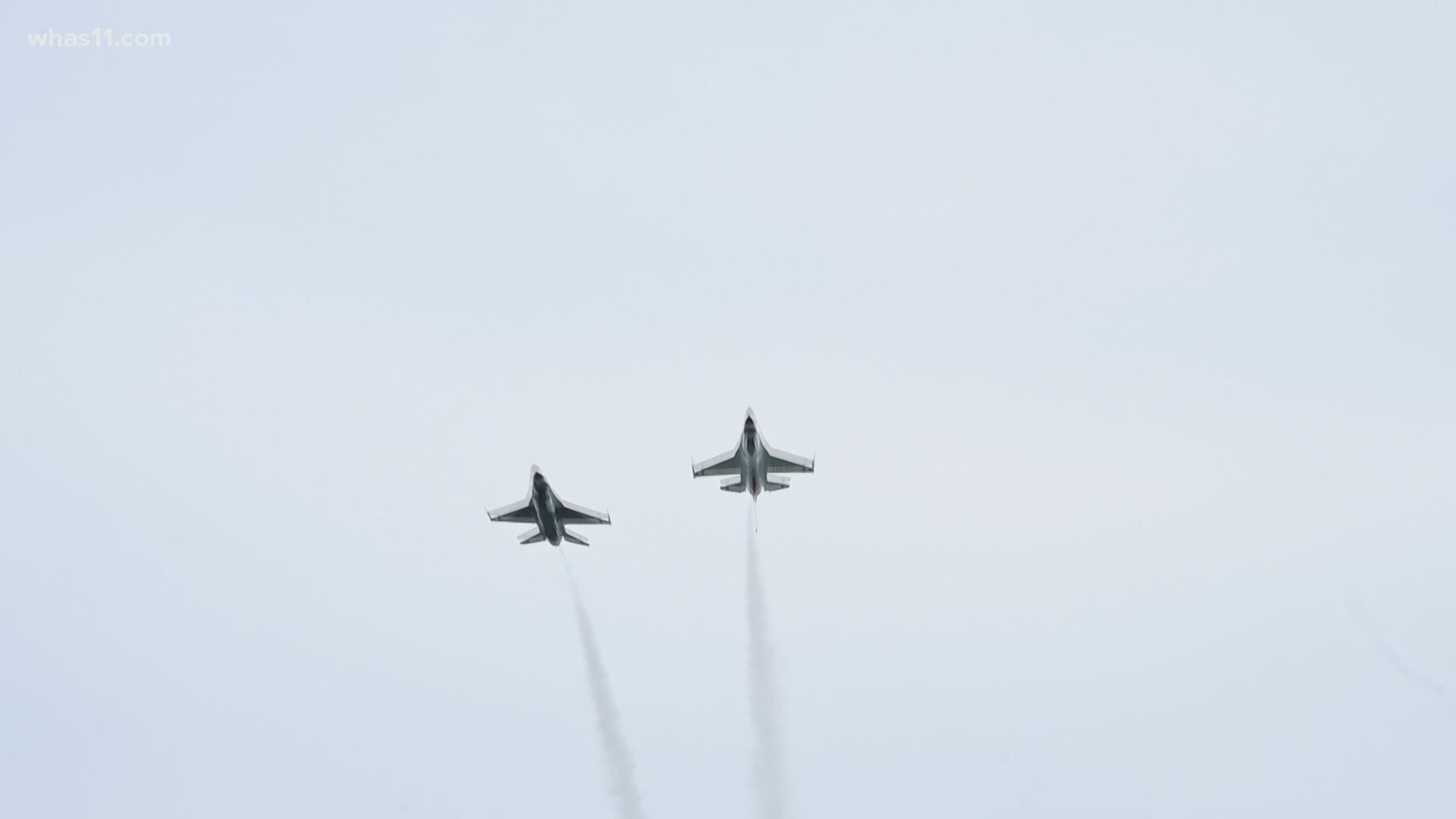 LOUISVILLE, Ky. — If you’re from Louisville and love all things Derby then you know "Thunder" is one of the most anticipated events to kick off the two-week Kentucky Derby Festival.

For more than 30 years, the show has grown from a modest fireworks display to an all-day celebration featuring a massive airshow. It was dubbed as one of America’s largest annual fireworks celebrations that has also received international attention.

Take a look at 11 things to know about Thunder Over Louisville throughout the years including changes to this year's celebration.
________

11. The first nighttime Thunder Over Louisville show, held on Apr. 17, 1990, following a sold-out Louisville Redbirds game. It featured a concert, laser light shows and a fireworks celebration. It was billed as twice as large as any fireworks show in the history of Louisville.

Credit: WHAS-TV
Apr. 17, 1990; Balloons fall as the crowd prepares to witness fireworks that will kick off Thunder Over Louisville, the opening ceremonies of the Kentucky Derby Festival.

10. Officials said “Thunder Over Louisville” got its name after show producers found out how much of an impact the fireworks show had on the community. The sound of the fireworks “rolled across the landscape” like thunder – so the name was given that reflected its intensity.

9. WHAS-TV held exclusive rights to broadcast Thunder Over Louisville from 1991 to 2003 before it went into rotation to other stations. 2021 will mark the 17th time the station will air the all-day event.

8. The Thunder Over Louisville airshow is one of the top 5 airshows in the nation. It features more than 100 planes including UPS' Boeing 767, the Kentucky Air National Guard's C-130. This year's show will be reimagined -- it's normally a 6-hour air show but will be cut down to 2-hours. 2019 Air Show Performer of the Year Matt Younkin will perform a day and nighttime show.

7. According to Zambelli, the first family of fireworks, Thunder’s physical set up includes 250 tons of launching tubes, some as high as 10-feet with a diameter of 12-inches. Two million pounds of sand pack the firing tubes on 1800-feet of barges. Almost 700-miles of wire cable connect 20 firing computers to the command post for synchronization to music.

Credit: WHAS-TV
Event producer Wayne Hettinger and his crew oversee Thunder from the Command Center at the Galt House in 1995.

6. One of the signature staples during Thunder Over Louisville is the one-mile waterfall of fireworks seen from the Clark Memorial Bridge.

Credit: WHAS-TV
The one-mile waterfall of fireworks seen on the Clark Memorial Bridge during Thunder Over Louisville 2017.

Credit: CJ Daniels/WHAS-TV
Crowds get into place as the Thunder Over Louisville Air Show begins in 2017.

4. Wayne Hettinger, the man behind Thunder's magic, has produced the show since 1990.

3. Thunder was delayed in 2020 to the summer due to the coronavirus pandemic but later canceled due to health and safety concerns. It was the first time the "Thunder" didn't roll across Kentuckiana.

2. If Easter falls on a scheduled Thunder weekend, the festival moves the show to the prior weekend.

1. KDF officials will have a drone show before the fireworks with 50 drones in various formations.

Keeping public health and safety in mind, officials will launch fireworks at 9:30 p.m. in five undisclosed locations – north, south, east and west of the city with another location in southern Indiana. They don’t want to make the locations public to avoid drawing crowds because of the pandemic. You'll be able to step outside your door and enjoy fireworks from the comfort of your home.