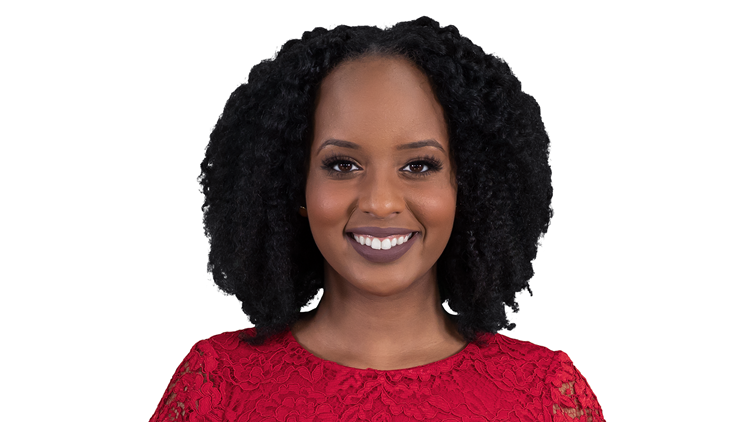 Senait Gebregiorgis is a multi-skilled journalist at WHAS11 in Louisville, thrilled to tell stories in the Derby City!

Senait was born and raised in Chicago, Illinois where you’ll find the best pizza and skyline in the world. She also takes pride in her Eritrean roots and rich culture.

Senait graduated from the University of Illinois at Urbana-Champaign (I-L-L) and earned her bachelor’s in broadcast journalism with a specialization in African American studies and political science.

Before booking flights, Senait spent 2 years hitting the streets of central Illinois as a one-woman-band. She served as a multi-media journalist and fill-in anchor at FOX Illinois News in Champaign and Springfield. There she covered community violence, severe storms and scored exclusive interviews -- including one with the family of missing U of I Chinese student scholar, Yingying Zhang. Senait sat down with the family members in their first-ever interview in the U.S. following the FBI’s investigation into Zhang’s disappearance, which gained national and international attention. During her time in Chambana, Senait also covered President Barack Obama’s visit and first major speech ahead of the 2018 midterm elections.

Senait is an active member of the National Association of Black Journalists.

Senait strives to be a watchdog in underserved and overlooked communities, and contribute to amplifying marginalized voices. She is always up for a challenge and loves learning new things.

Traveling to new places is one of Senait’s favorite hobbies because it gives her a chance to learn about different social groups and cultures. She has committed her time to volunteering and giving back to communities including Puerto Rico, Selma, New Orleans and Catalina Island.

Senait also loves spending time with family and friends, Netflixing, dancing, yoga/workout classes, performing arts, coffee shops and trying new food -- so if you have any recommendations in The Ville send them her way! She loves meeting new people so don't hesitate to slide in her DM with story ideas or when you see her out and about say hello! Feel free to contact Senait at sgebregior@whas11.com. You can also connect with Senait on Facebook, Instagram or Twitter.